Ah I think I’ll be glad to see the back of this year. The trip to Crewe went, I believe the expression is, tits up. Having had a message from Mr Myers saying I wish you were here, flights were booked, hotel sorted, permission grated from milady *rolls eyes lol* and I was up up and away.

Flight was sound, as ever, and I hit Crewe before 12pm! I have to say that the Crewe Arms Hotel sucks. Anyone catching this blog by accident from a search for Crewe, grab a room at the Waverley instead.  After having asked several times when he was working I dropped my stuff at the hotel and took an amble into town, after having dropped a couple of mails and texts to say “I’m here”, albeit not in the voice of the little girl from poltergeist. I got a text back saying “I’ll ring you later”, so I assumed he was working and farted about in town. Good to catch up with Dave n Shaz, and Mchorny (Ric for clarification…. not someone from Greys Anatomy!!), and time passed, so I thought, lets take a plod over to Broad Street, tipping a hat to the old man as I walked past the grave yard accordingly. Got there…. no answer.

So, having killed the afternoon, and now presuming maybe he’s on 9-5 rather than my guessed 6-2, I head back to the hotel expecting a call as my battery is trying to die! Still no call, so eventually at about 10 am I head up to say Ello to young sir Richard at the corner bar, where some surreal conversation ensued.

Now… the plan of attack as to have been, speak to Tony on the Thurs, then I’d prebooked a hotel in wolves, (two single beds.. we were always close but not THAT close),  and pay for him to have a night away from Crewe either Fri or Sat evening, depending on when he was working. But, with no call, no text, no email and no reply to any of my enquiries for when he was working, I got up and headed off to Wolves, thinking that, if needs be, the plan could still work. He’s bound to get in contact, and in truth at 20 quid for the room it was cheep enough for me to sod it off… and head back up to Crewe if needs be for the night. Still nothing.

And so I went out. Actually I had a great time in the Giffard in Wolves, as I always do. A waffle to Tim, his lady, a swift chat about games with Riki, a chuckle with John about some idiot pulling his beard, Yeti being yeti.. etc etc. It was all good.

But none of that was the reason for me being there. Landing back at the hotel I was pretty pissed in every sense of the word and vented a little on the ever handy Facebook. As you do! After what happened in Sweden, the last thing I wanted was to have spent a shed load of cash on doing something for someone and ending up feeling screwed at the end of it, yet, that’s exactly what happened. Tony has always been unreliable. Hell we used to arrange to meet up as kids and you’d pick a time half an hour earlier than you needed it to accommodate him being 30 mins late lol. But this was no real laughing matter.

I suppose the fact is, in the space of the last 6 months, we’ve offered to buy Tone a passport, offered to fly him out here, and then subsequently I’ve gone over there for this. All of the above have gone tits up, when, with 10% of the effort put in by myself, all of the above could’ve worked happily.

Add to what I spent to go over last week, to what I spent in Sweden in an attempt to look after my sister cos she said she wanted me there, and it amounts to nearly a grand outlay, with nothing good coming out of it, and still not having received my trainers back from Sweden! I put my trust and faith in people, I try and come through for them and instead I get treated like shit. In this case I am reminded of when my dad died. Tony said he’d come with me, and bottled it on the day, simply opting to not turn up so I had to bury my dad on my own. A few months earlier, when his mother had died, I borrowed money to get to Crewe so I could support him. I was the only one of his friends who bothered.

And so leaving I have had a garbled voice message and two missed calls from him, missed cos I was on a plane so that dates them the monday after I arrived on Thursday. I replied to a text, but again, have heard nothing back. Such is life.

The one positive I got from the whole thing, was that I got to spend an afternoon with David. Football in the shed, some food, and a good 3 hours of waffle. It was good to see him. Grown up, self sufficient, and far too much in mannerisms at times like a lad I used to know a few years back who looked a lot like me.  lol hmmm!

And so back to Holland I returned. Xmas was a snot soaked affair, colds all round. New Year approaches fast and I am pleased to see the back of this one. I’ve lost my sister, and the person I suppose I’ve always thought of as my best friend since I was 5. Next year needs to be better. Hammer the weights, actually put some effort into learning some Dutch maybe, and properly construct this book I’ve been talking about for years now. I suppose another tie has been broken to the Uk with all this, and I really hope he comes through this stronger, but my responsibility is to me and Esther, and I need to be chopping out of my world things which leave me in situations like last week.

So, here’s to next year people. Slainte Mhath!

New Year With Wifey and Nephews!

So, we made it back over to Crewe again on a quest for jeans, underwear, and catching up with old friends! Not sure as to which category real beer falls into but… we caught up on that too!

New Years Eve we headed straight into Crewe, hit the shops on a quest for pantage, and managed to manipulate a meeting with Heidi-Rose! Was good to bump into her again. As suspected, she appears to have her head screwed on, the girls were bouncy, and H managed to get us into a scary shop with dodgy shoes.

Tickets sorted for later on (thank you Ross n Karen) it was time to get down to serious shopping! Jeans appeared to me in a surprising form! BHS! I fear I am getting old! Okies… back to the hotel and off to the pub!

1st stop, The Duke of Bridgewater on Edleston Road/ Wistaston Crewe, made especially attractive by its free WIFI. There we met Chris and Richard Wiseman, Hamish’s kids, and Matt, for a few games of pool, and a pre Dantes beer or four! Nice to break the ice in a venue where you can hear conversation! Actually had a really good waffle with them!

Then to Dantes. Was good to see Paula again, looking especially well, and good to introduce Esther to Lisa, Sharon, Pod, Jo, etc etc. All in all, we had an excellent night! Awesome seems to be the buzz word! lol

So Saturday arrived slightly blurry, but it was a day to relax. Tramped off to the imp for some footy, and dropped Mike and Sarah a bell to say where we were. They came down for the Liverpool game… which extended into the Arse game… which moved on to a curry! A good time was had by all, but I’m never mentioning carnations or Surf n Turf in company again!

Then, we took a trundle to the Hop Pole and had a chuckle with Mr Myers! Always good to catch up!

So, Sunday we hit Hanley, and, instead of getting jeans, we wound up with underwear. Hmm.. actually that’s not quite true. Es got underwear! Surprisingly expensive but still waaayy cheaper than Dutch offerings, it was good to get things that now accommodate her weightloss! Hot stuff milady! lol 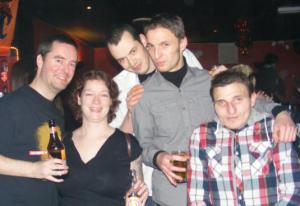 And so it came to the time to head back home. But first… a day in Manchester. Having only managed to pick up two pairs of pants (part of the vindication for actually heading over the water was “Buy Pants! Buy Lots!”) we did Manchester! And lo, there came upon the two Wiseman’s some jeans! 4 pairs in fact, of which milady also seems to fit in all of them! 6 pairs of decent jeans for under 90quid! Bonus! That saved the airfare and most of the hotel bill!

So… asides from the delay on the way home… all was well with the world!

Info on me, my sports writing, Leiden, Local Pubs, Rock Club, Bars, and other such wonderful offerings