So, instead of Vegas this year, we headed out to sunny Wolverhampton for a few days, to prepare for 5 days in a field in Donnington for the Download festival. Landing in Brum on the Friday we basically did not pass go, and went directly to The Giffard, my old haunt. John Silver had chosen this week to bugger off to L.A. for Van Halen and the Beach Boys, so instead there was a different chap behind the decks for the evening, but, it’s reasonable to assume that if you’ve spent more than a few Friday evenings you’ll have a rough idea of what John plays. Music was good, and managed to catch up with Si. Bonus!

Saturday we headed up to Wellington to grab some combats from the place where, probably 6 years earlier, I got my last pair, and then met up with Steve for a beer. Again, twas good to catch up. Without him I’d’ve never been able to’ve gotten over to Esther, many moons ago, to begin the adventure that is still continuing. It appears he’s spawned and married, but was very much the same person, which is commendable! I’ve hear rumours marriage and kids alter people!

Sunday was Brum day, and lo, the lord, or rather the sales,  brought me into contact with Doc Martins, the god of shoes. *happy bunny*. I’ve needed sturdy shoes for a while and you just can’t beat DM’s. Mother threw out at least 4 different pairs of mine and asides from one pair which are too small, I’ve never managed to get any new ones!

Frankly I can’t remember what we did Monday, which has to be good, so Tuesday we took a wander into Shrewsbury to show Es the historical town. Think she was quite taken with it to be honest.

The came Download! Having bought a tent in Leiden, and picked up a sleeping bag + carry bag in Wolves, we were sorted for equipment, so we were just reliant on a: Public Transport, and b: Danny holding us a spot! Danny, did us proud! Public transport… not so much. About a 2 hour delay getting into donnington itself was actually good compared to 6 hour waits some people had. And of course… as soon as we arrived, it tipped it down! Seriously! Stormatastic! Putting the tent up was .. an experience! But, it was up, or, erected, as was mentioned later, and it seemed impervious to moisture, so, it was doing its job!

So, what to do. The campsite was slowly turning into a bog, Gregg had gone home, (not such a bad thing in truth),  and attempting to spend all day in a quagmire was only going to wear us out. Half a nights sleep didn’t help, but, intrepid as we are, we decided to take a wander out into the great beyond, or, more specifically, Castle Donington town! Seems we were not the only ones. About a mile down the road, the town started and in typical English style, there were about 6 local pubs, all besieged by long haired denim and leather clad guys n girls! Sorted! A slightly sozzled us made our way back to the tent in the evening and spent til the early hours shouting convos with Danny and a friend about everything from Weebl n Bob to Abba and Chesney Hawks! Bonkers? Maybe, but it added to the atmosphere! Was good to spend some time with Dan, especially as we’d kept him waiting while stuck in traffic. 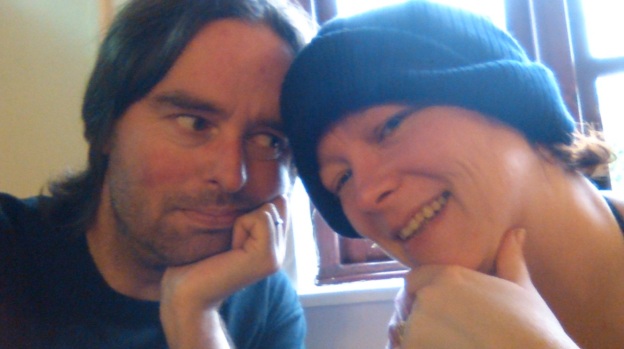 Ah, sitting down, in the pub, with beer and no mud!

Friday came. Music time. Quireboys and Terrorvision were fun, but Europe got eaten by the weather, and simply never managed to get there. Arse! Machine Head sounded well on main, but by then it was to grim to really hang around, so we missed the headliners and headed back to the shelter of the tent. I believe that was the sensible thing that kept us sane for the rest of the weekend!

Saturday announced its self with more rain. By this time the mud was up to the top of my 10 hole DMs, and Esther, having calf muscles that could carry a woman nearly 70lbs heavier, couldn’t get into new wellies, so her 8 hole ones were struggling, but.. out in the arena, they’d laid some… some… straw. Not much… but some. Smart move! Today was expected to be fun. Saxon were playing early mainstage to set the  day up, but first Esther wanted to see Fozzy… who, I have to say, does have a voice on him. Unfortunately they clashed, so I was responsible for dragging milady off to Saxon, who were, in truth, good, but reserved, which was explained by Biff as being because they had such a short set. Trivium were decent enough, Steel Panther were filth personified, which kind of left Tenacious D with big shoes to fill. In my opinion, one off the two shouldn’t have been there. Such is life. Then it was off to see Corey Taylor do probably the most enjoyable show of the weekend. Versions of Snuff and Bother were amazing. This guy seriously seems to love what he’s doing. And then it was the toss up. The Mission, or Metallica? I was hoping to manage both, sandwiching Mish within Met, but it pretty much turned out we saw maybe 6 Metallica tracks, and all of the Mission set. And so we went from the most enjoyable, to the most authentic sounding band. Having seen The Mission before, they were pretty awful, and again, having convinced Esther to come with me to watch them I was pretty much hoping they would be a damn site better. And they were. *happy bunny x2!*

So, Sunday cometh, the day of Black Sabbath. Asides from Shinedown, the day was spent loitering around the main stage. The straw had still not found its way back to Black Camp, the the arena was passable… ish! Shinedown were pretty good. Professional is probably the best way of describing them. Milady liked them I think.

However.. shine down the sun did also! Breaking through the clouds, suddenly we were all toasting. So much so that, sunburn got both me and Esther, albeit nothing like what we had in Vegas last year, but still uncomfortable nevertheless!

Devil Driver were angry but actually listenable to, as were Anthrax! Pleased to hear Got the Time played live!! (tickin in my head!) Black Label Society were pretty damn poor, much vaunted as they had been I’d’ve probably rather Europe had turned in instead of them! Lamb of God did their thing, Megadeth were pretty damn good, and Soundgarden, Es liked but are not my thing. Sabbath however, were pretty damned good. Watching Ozzy dodder around the stage like a George A Romero zombie but still manage to sound good, was both funny and impressive. The set was long, full of oldies and a few rarer ones, and finished the whole thing off nicely with Paranoid! Classic!

And so… Monday = pack up time, and off to Derby. Congrats on the hotel for being right next to the station, and a mention should go out to Viceroy Indian for an excellent meal. All in all, considering the weather… i think we had a good time. It was certainly an experience!

Well I’ve neglected this for a while now… mostly due to being mildly fuming regarding my visit to Sweden and not having enough self control to bite my tongue while writing!! However, time has passed and although being still minus trainers AND money owed, I can at least refrain from wanting to get on a plane and strangle my sister. I don’t like being used. I don’t like being treated like shit, but I guess even from the day I landed there I knew it was only going to end badly. One day I will trust my instincts over my sense of loyalty, although last time I did that a mate ended up with a mangled nose.

So what’s new? Well, I’m flying again, this time over to Crewe and then Wolves for a few days. It’s a pain to be such a distance from people but on the other hand it is good that the facility to just get on a plane is available. Quite how Esther puts up with me I don’t know! My last trip being Sweden, I have to hope that this one turns out more positive. I don’t mind the travel but the fall out and cost of Sweden can not be allowed to be repeated. However, some things require a friend to appear. Wolves will also be fun. The Giffard is always a good chuckle, and a return to the Shed could prove entertaining too. Booked a hotel with two single beds, so may manage to lure Mr Myers out of Crewe for a beer. If not… I’ll push the beds together and spread out! lol

Other than that… Download is booked. We’re going camping! Metallica and Black Sabbath and Prodigy, oh yes! Should be a giggle. 5 days in a field. Danny will be there too… so that just adds to chuckle that will ensue. No vegas for us next year.. but looking on including Ireland as a starting point before Download, and maybe heading north (or south) afterwards. All ways round it’ll be cheeper than Vegas lol… and with the expenses of the year just gone, who knows… Vegas at xmas 2012? lol

Right.. woman on bus home.. so I should tidy!

Info on me, my sports writing, Leiden, Local Pubs, Rock Club, Bars, and other such wonderful offerings